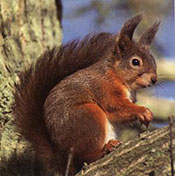 Fact #1
Former president Theodore Roosevelt had pet flying squirrels in the White House during his presidency.

Fact #3
A squirrel can fall more than one hundred feet without hurting itself.

Fact #4
A squirrel can use its tail for balancing as it leaps from branch to branch. It can also use its tail as a blanket to wrap around itself in cold weather, as a protection when fighting and as a form of parachute if it falls from a high tree.

Fact #7
In a bill passed by the 82nd General Assembly in 1982, the white-tailed deer became the official state animal of Illinois. However, there were several other contenders, including the fox squirrel.

Fact #8
The only warm-blooded mammal known to survive, without freezing, body temperatures below freezing is the supercooling, hibernating arctic ground squirrel. When its body temperature drops as low as 26.8°F, it uses one tenth the energy it would take to maintain its temperature above freezing. The animal apparently uses some method of supercooling so that its fluids cannot freeze at or below their freezing point. Its blood does not contain antifreeze molecules, however. The arctic ground squirrel is the first mammal discovered that can survive after being supercooled for more than an hour.

Fact #9
The fox squirrel, so named because its fur is sometimes similar in color to that of the red fox, is the largest tree squirrel in North America. Because of its orange-brown color, it is often mistakenly referred to as a ‘red squirrel.’ However, the red squirrel is a much smaller squirrel (weighing 5-11 oz. as compared to the fox squirrel’s weight of 17½-37 oz.).

Fact #10
The African ground squirrel is called a Xerus.

Fact #11
The skin of the squirrel is called the vair.

Fact #12
Country singer Wynonna Judd and her sister, Ashley, had a pet squirrel when they were kids.

Fact #13
In 1833, the same year that Salem, IN was hit by a cholera epidemic, a huge squirrel invasion occurred in Washington County, IN. Thousands of squirrels came from the north, filling the trees and fences, and ruining the corn crop. The settlers tried killing and capturing them, but more came. As quickly as they came, they disappeared with no one knowing what had brought them in the first place.

Fact #14
Indiana high school basketball is never without its stunts. In the 1922-23 season, Butlerville High left its opponents in a quandary with its “squirrel stunt.” The team’s 5-foot, 110-pound guard, Merlin Swarthout, would find a way to get his guard out of position. He then scrambled up the back of the team’s center, 6-foot-4-inch Raymond Rees. The bent-over Rees allowed him to take a quick pass and Swarthout would lay it in the basket. Butlerville used it to get into the semifinals, but that was the end for the “squirrel stunt.” A rule was made the next year prohibiting the stunt.

Fact #16
The origin of the English word squirrel lies in the Greek word skiouros (“squirrel”), from skia (“shadow, shade”) and oura (“tail”). The squirrel, then, is “the shadow-tail;” that is, the animal that can cool off in the shade made by its own big, bushy tail.

Fact #17
SQUIRRELS ARE NOT RABIES CARRIERS!

Fact #18
The state mammal of North Carolina is the gray squirrel.

Fact #19
Red squirrels are extremely noisy. They seem to be forever cutting and storing pine cones (up to one hundred per hour by each squirrel) and scolding one another all the while. From the behavior of the red squirrels has come the idea of describing an odd or crazy person as being squirrelly.

Fact #20
Squirrels are known for their habit of storing food for the winter. Among humans, to hoard (anything) for future use is to squirrel (it) away. And that, my friends, is the rest of the story.

Fact #21
Slippers made of squirrel’s fur were the original ones worn by Cinderella, for this familiar nursery tale came to us from Norman-French, in which the word for squirrel’s fur is vair. Somewhere in the telling, this became verre, the word for glass, which sounds the same, but surely fur slippers are more comfortable than glass ones.

Fact #22
The word “chipmunk” comes from Algonquian Indian “adjidamo” which means “tail in the air.” It evolved from adjidamo to atchidamo to chitamon to chipmunk.

Fact #23
Squirrels will not bury acorns with parasites in them — their sense of smell is so keen that they recognize these as spoiled and reject them.*

Fact #24
Twiggy, the famous water-skiing squirrel, got her name from what was left of Chuck and Lou Ann Best’s house plants from her chewing all the leaves off after they brought her in as an orphaned victim of Hurricane David.

Fact #25
Both Olney, IL and Kenton, TN are known for their white squirrels. In both cases, the squirrels are albino and have pink eyes. However, there is one difference between the albino squirrels of Olney and those of Kenton. In Kenton, the squirrels eyes are entirely pink; where, in Olney, the squirrels’ eyes have pink pupils surrounded by bright blue irises.

Fact #27
In South America, there is a monkey called the squirrel monkey.

Fact #28
In March 1995, two naturalists announced the rediscovery of the wooly flying squirrel, thought to be extinct since 1924. The animal, which lives above the tree-line in the Himalayas, is gigantic by squirrel standards – two feet tall, with a tail of the same length. After several unsuccessful expeditions in search of it, Peter Zahler and Chantai Dietemann found the creature in an isolated valley.

Fact #29
Squirrels can jump up to 20 feet. They have long, muscular hind legs and short front legs that work together to aid in leaping.

Fact #30
The Twiggy currently performing (as of August 2000) is Twiggy IV and is the first Twiggy born in Lou Ann’s house. Twiggy, of course, is The Water-Skiing Squirrel and Lou Ann Best is her owner. Twiggy IV is the daughter of Ollie, The Jet-Skiing Squirrel. Twiggy III was the only Twiggy that was a boy, originally named Magic.

Fact #31
The hind legs of squirrels are double-jointed. This helps them run up and down trees quickly.

Fact #32
A male squirrel can smell a female in heat up to a mile away.

Fact #33
Only about one in every twenty squirrels that catch squirrel pox can be expected to survive it. But those that do survive it have a permanent immunity to squirrel pox and can never catch it again.

Fact #34
The hibernating arctic ground squirrel is the only warm-blooded mammal able to withstand body temperatures below freezing. This squirrel can be found in the state of Alaska.

Fact #35
Squirrels eyes are positioned in such a way that they can see almost as well behind them as they can in front.

Fact #36
Squirrels have five toes on their back feet and four toes on their front feet. Their claws are very sharp and help in gripping tree bark for climbing. In addition, the back feet are longer than the front.

Fact #37
In addition to residing in the eastern US, eastern gray squirrels can be found in many western states, Great Britain, Ireland and South Africa.

Fact #38
Squirrels can eat their own body weight (approximately 1.5 pounds) every week.

Fact #39
000 is the agent number of cartoon character Secret Squirrel.

Fact #40
The gestation period of both the fox squirrel and the eastern gray squirrel is 44 – 46 days.

Fact #41
The largest squirrels in North America are woodchucks, also known as ground hogs. Woodchucks are in the genus of ground squirrels known as marmots.